Millipede treatment Perth. Are millipedes invading your home or business? Our qualified technicians can help with your Millipede infestation.

The Portuguese millipede species was accidentally introduced into Australia without its natural enemies and has since become an invasive pest. Several methods have been developed to manage this millipede.

Millipedes normally live outdoors where they feed on leaf litter, damp and decaying wood, fungus and vegetable matter like tender roots, mosses or green leaves on the ground.

The smooth, cylindrical body of the Portuguese millipede separates it from the native species around Perth, which have a bumpy look. Portuguese millipedes gather in large numbers and are quite mobile, especially after the first rains in autumn, causing them to be amongst the most common nuisance pest in Perth.

Portuguese millipedes will curl up into a tight spiral when disturbed, or try to escape with thrashing, wriggling movements. They are approximately 20-45mm long with 50 body segments when fully developed. 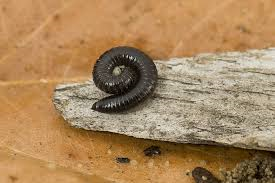 Millipedes grow or develop through a series of moults. Each time the pest moults until it is mature, more legs and body segments are added. During moulting millipedes are very fragile because the new cuticle is soft and easily damaged when first formed. The millipede usually eats the old cuticle.

Although millipedes play a useful role in breaking down organic matter in the soil, Portuguese millipedes are pests when they reach high population levels. Portuguese millipedes are not harmful to animals or humans, but they can be a notable domestic nuisance when they swarm homes and gardens in their thousands each autumn and spring. They are one of the few millipede species that are attracted to lights at night, and this is probably why they invade homes. They do not breed inside houses, and once inside a house will most likely die. Millipedes can occasionally damage horticultural crops such as melons, strawberries, tomatoes and potatoes, yet in small numbers they do no harm.

Portuguese millipedes in the house and garden will probably have resulted from eggs laid within 100m from the house, and while compost is good for gardens, it also allows higher populations of millipedes to develop. Reducing the area covered by organic matter such as compost, leaf litter and mulch, will help reduce millipede populations by decreasing food and areas of shelter.

To help minimise an invasion of your home and business turn off external lights which are close to buildings and minimise the escape of light from buildings through use of curtains, blinds and weather-strips on doors. Effective door seals will prevent the entry of these unwanted pests.

TMO Pest and Weed Management uses reliable methods for prompt and safe management of millipedes. We service the Perth metropolitan area and surrounding suburbs. Our technicians have great amount of experience in treatment and management for all millipede treatment Perth.
To get one of our technicians to eradicate your millipede invasion: